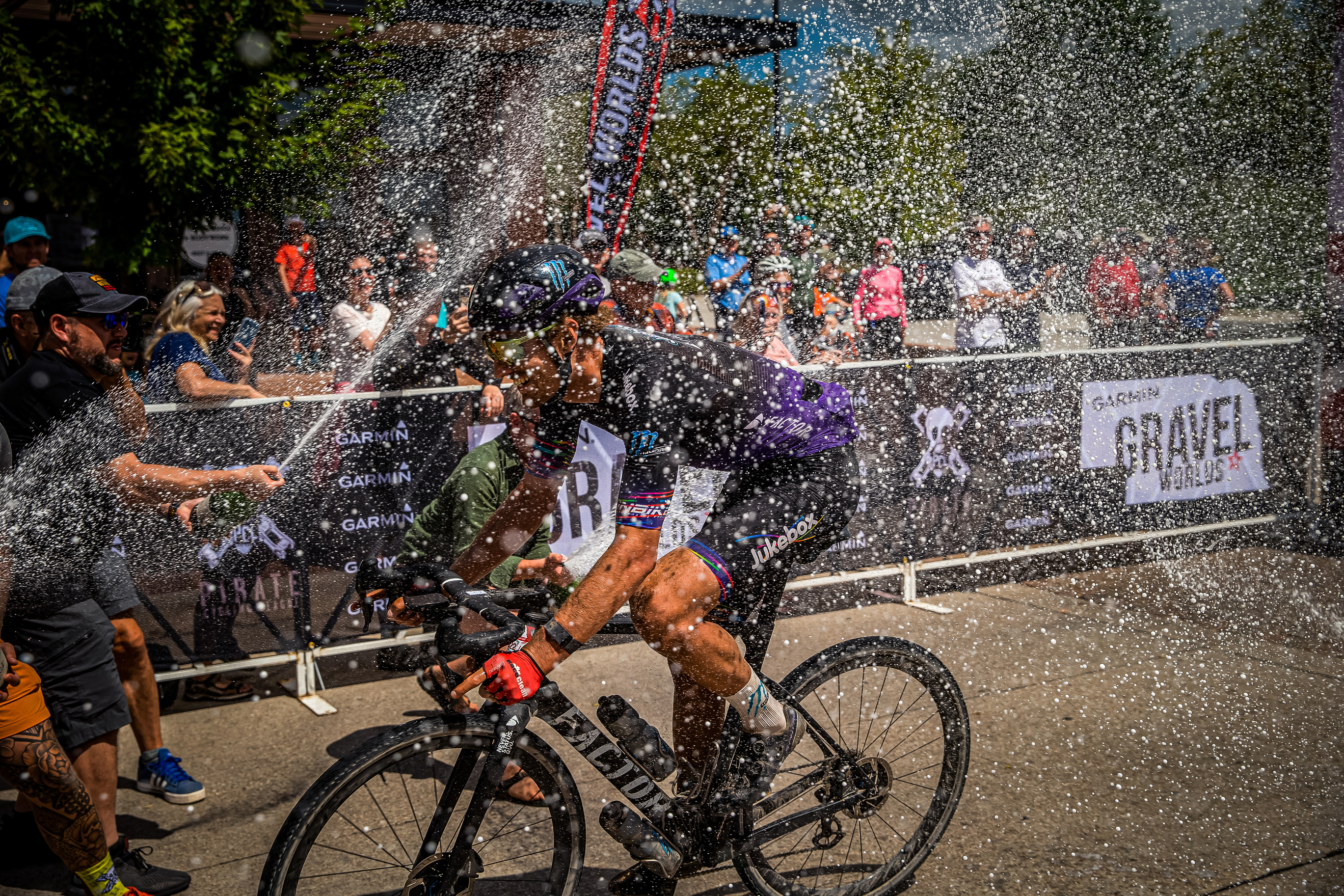 After racing LeadBoat—the Leadville 100 MTB race followed by Steamboat Gravel (SBTGRVL)—any racer would be exhausted, and probably more than usual thanks to a week at high altitude. That was certainly the case for Adam Roberge, but that also wasn’t stopping him from heading to Nebraska to not only race, but to win—and set a 16 second course record—Gravel Worlds in a dominant solo effort to the finish. We caught up with him a few days after his win to see how he and his legs were feeling:

Are you fully recovered now?

It took me some time. I think I am today, finally. But the last few days… I really, really took some time to recover. I don’t know why, but it’s been tougher than usual.

Any idea what it was about the race that made recovery so much harder?

I really had to push harder than usual for longer in the race, and for the win at the end. Normally, I'm able to be back in a sort of normal state in 30 minutes after a race. But this race, I mean, it took me until 7pm to be even kind of OK. The last 30k of the race was by myself, I really had to dig deep. And I was on the verge of not passing out, but having to sleep on the side of the road.

Do you think part of that might have been from the week before, racing at like altitude?

It definitely didn’t help. I really was careful about making that week between these races very easy. I thought I was good. But even two hours into the race, I was already feeling that tiredness. But I just pushed through that. I think it was probably fatigue from the past weekend, but I didn’t want it to affect my race.

Give us the Gravel Worlds breakdown. How did the race play out?

We start the race at six, which changes things a lot. We were racing in complete dark for a solid hour. In a way, it made the race maybe a little bit better for us on the front. I think we all pushed that pace because it's a little bit harder to draft in the dark, so the group was small right away. It didn't take too long to have a very select group of maybe 20 guys in front. But as it got light, people were coming back because the way that the gravel is there: it's really fast and a lot of little ups and down so every time you would get a little selection, the group would come back quickly.

As the race went on, one by one, people were dropping from that lead pack. And I think 100k from the finish, we had a group of six riders—five bikes, though, since one was a tandem! That tandem made for a weird, weird dynamic because when you go downhill, usually you can have a rest. But every time we went downhill with the tandem, we would have to really keep that momentum going because they had the weight to go faster. It was kind of okay for me, because I'm a bigger rider. So I was pushing a little bit more going downhill, but I think especially for the smaller riders, that tandem killed them. A lot of guys were losing a lot of energy.

We got to the last checkpoint, which we had stopped at on the way in. We didn’t stop to refill, because it was more technical. Coming out of it though, I had a few second gap, and I was tired, but I knew I needed to go for it, so I attacked. Eventually, that tandem and John Borstelmann were able to come back to me because they had a good chemistry together. But then, we were on this descent and there was a bit of a sharp turn, and John and I both missed it but I was able to turn around and get back on course faster. So by that point, I was like,' Okay, I have a gap. I have to go.’ With 20k left, it was just a One on One drag race. It took out everything out of us but I was finally able to hold on to that gap. But honestly, not by much! The last climb, my right leg was cramping to a point where it was so painful that I was worried he was going to catch back up, and he almost did.

Had you had you planned on making this race a focus?

I knew that SBT GRVL was a big gamble because of Leadville that day before. I was hoping for good legs, but it was not what I was hoping for. But I felt recovered quickly after, so I knew I wanted to have a good ride at Gravel Worlds and really go for it. It's still considered one of the biggest races of the year, so it was definitely a goal. I knew it was possible for me to have a good result there.

This is your your biggest results so far this season. How does it feel coming back and getting that big win?

It feels good, for sure. I feel like the form is coming back after a concussion and COVID. My form has been coming back but I wasn’t getting the results I wanted. And SBT GRVL was maybe a little bit frustrating for me because I felt like I gave everything I had the day before at Leadville, so then I couldn’t do what I wanted to do in SBT. You don't realize how much it kills you to be at altitude for a week, but it really takes a toll.

The finish at Gravel Worlds looks pretty amazing, with the crowd and champagne spray and everything. How did it feel?

It was so good. I was finishing the last gravel sector, which is double track with sand, and then you go on the road for the last 500 meters. I was  trying to hang onto my gap over second—I was looking back to check for him, just giving everything that I had. I was so exhausted. Crossing the finish line, I did have a minute where I was feeling amazing and could enjoy it. But after that, I think it took me 15 minutes to be able to stand up again. Everything is a bit of a blur after coming through the line: I was super hot and then I was really cold, my system was really struggling! But at the same time, I understood it was this really fun finish and feels so big and everybody is cheering.

Next up for Adam is Vermont Overland, a 100k gravel race this weekend! You can read more about Gravel Worlds here: