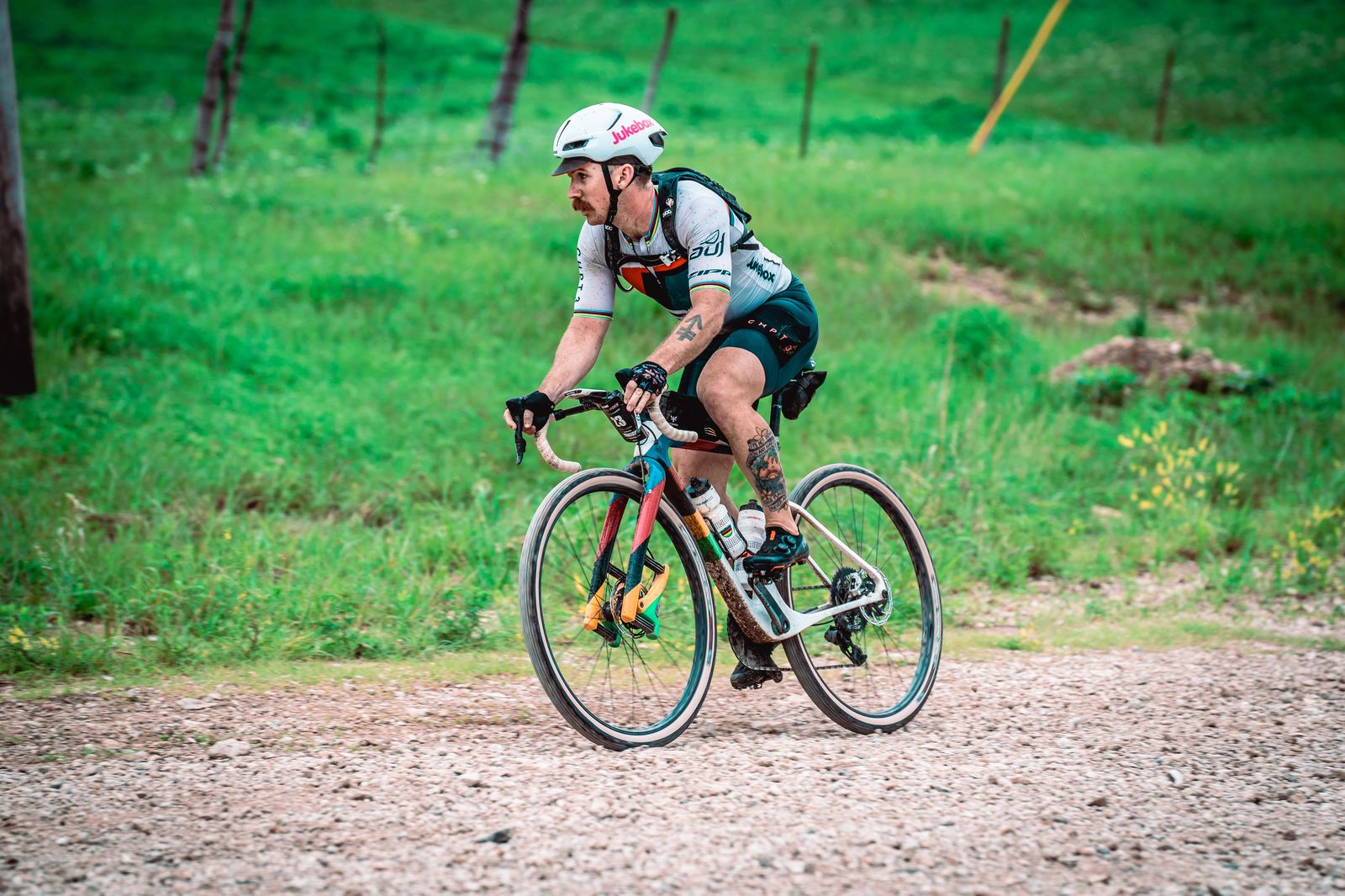 Ashton Lambie has had a pretty intense re-introduction to gravel racing (and an introduction to mountain bike racing!) this season, after setting a World Record and scoring a World Championship jersey on the track last year. As the world’s only member of the Sub-4 Club (finishing 4K on the track in under 4 minutes), he shifted focus to gravel grinding and the Life Time Grand Prix Series this spring. After racing the Sea Otter El Fuego 80K and Unbound, we caught up with him to hear how the return to the dirt is going. And stay tuned for an upcoming post featuring a gravel cyclist gym workout that he’s designed!

Are you getting a bit of a break?

Yes, I’m back in Texas, finally. Crusher in the Tushar is the next race and I've got a few weeks until that. I feel like there was a couple months there where I was doing something every every other weekend. It was a lot, so I’m thankful to have a more relaxed schedule for a bit.

It feels like people really over-booked their calendars this season!

I don’t know how some of them are doing it. Gosh, you see other guys on the circuit who are racing these long races every weekend. I don't know how people do it. I finished Unbound and then drove back home: I had a three day Zwift video shoot starting that Monday. And that alone absolutely wrecked me.  I could not have done a race that next weekend. No way. No chance. But I see why so many people do it. It's so easy to just overcommit and get burned out.

Coming back to gravel is definitely a transition. The level of gravel has just risen so much since I was really in it full time four years ago. It's going to take me a while to get back to a more competitive level. But honestly, I'm just having fun and really enjoying the process. Gravel racing is quite a bit different from track. In gravel,  the training might be like, 'Okay, go  do a long ride.’ That's pretty unstructured versus ‘Okay, you've got two workouts that you have to hit this exact wattage and you do them on ERG mode.’ It's a different methodology. It's a little more relaxed and a little bit more like an experience-based and less of just a math equation. And that’s fun. I'm really enjoying getting reacquainted with that part, and not being so focused on results.

Has it been hard adapting that process-focused attitude and ignoring results a bit more?

In any racing, you really have to enjoy the process. If you don't enjoy training, and you don't enjoy just riding your bike for fun, what are you doing? I’ve had some incredible results in the past. And I think I'm really trying to look at this as a full season where I have an opportunity to play a role in the Life Time Grand Prix series. I have no illusions of being competitive in the top of what I would say is a pretty mountain bike heavy, climbing heavy series. I don’t think anyone expects me to be in the top five! But I'm having a great time getting to meet all these people that have gotten into the gravel scene and seeing firsthand what gravel has become. To get to enjoy that and get to enjoy six of the biggest, most iconic races in the US is awesome. I'm having a blast.

How was your first mountain bike race?

I did jump in on the deep end, racing Sea Otter as my first mountain bike race. I feel like I learned a lot, and I had some some great people to ride with and teach me stuff. My partner Chris had a week off from work in February and  we went and did a training camp out in Bentonville, Arkansas, for like, five days of MTB riding and had a blast out there. I learned a ton from her, since she’s great on the mountain bike. So that really helped a lot.

I didn't go in having a lot of expectations. It was just an incredible experience for sure. Peter Stetina did half a lap with me of the course the day before the race. It was also just going into it knowing people that are a lot faster than me were racing, but that they were generous enough to let me tag on their wheel and wait up for me every once in a while. That was huge.

In the race itself, I didn't know how hard the start was going to be. Thankfully, it settled down and I feel like it spread out pretty well. I get pretty nervous in a pack. That's why I do time trials, because I don't like riding next to people very much. But after the first lap, I was much more comfortable. I'd see one person every 10 minutes or so, either passing someone or being passed by someone, or maybe someone crashed or flatted or whatever. After that, it was just a gorgeous ride through some incredible scenery. And then I also still got to work on the technical sections. I'd be like, 'Okay, I'm gonna hang with this guy through this section.’ Or, 'Oh, I'm gonna try and catch this person on that climb.’

Recovering from Track Worlds is different because there's also the fatigue of the whole season built into that. And so it was also a lot of mental recovery. Unbound might have been a little less of that. Sure, there the fatigue of riding 200 miles: I drove back that night and camped on basically the state line between Kansas and Oklahoma, and then drove back the next day to pick up Chris and get ready for a three day photo shoot. Honestly, that shoot was a blessing in disguise. I had to do some riding for it, but I couldn’t really train.

And one of the cool things about that video shoot was that I got to go to the grass track that I first raced on in 2016, where I started my track career. That was a really special moment for me to carry away from Unbound. If felt like I was coming full circle. The last time I raced Unbound was 2016, and that was also the first year I raced on the grass velodrome and started this whole track journey. Now, I’ve won World Championships, I’ve gotten that world record. And now I'm back at this grass velodrome and I'm back at Unbound. That was a really special thing.

How has the gravel scene changed since you first got into it back in the 2010s?

I think there's just a bigger diversity of events. I think a lot of the growing pains that gravel is going through comes from people having different expectations for what a race is ’supposed to’ be like. I love that there are so many options, from something as big as Unbound to these small local events.

I don't love some of the changes. During Unbound, there was one moment towards the beginning of the race, I was at the back of the front peloton, and there was a crash. Someone touched wheels or took a bad line. Three people went down and one person was really slow getting up. Everyone in front of me just dismounted and ran around the crash.  I was just like, 'Come on, man. We're 100 people back, what are you racing for? See if this person is okay!’ I think it's easy to get caught up and feel like it’s a huge, really important race. But it's not really that way for everybody.

Any tips for gravel racers after racing Unbound?

I saw a lot of people with flats. I also saw quite a few people unfortunately crashing. So I think doing a practice gravel race on your setup and making sure you're comfortable with it before tackling something like Unbound is huge. And when you're planning your on-bike packing strategy, budget a little bit of extra space for your trash, like half an empty pocket that’s really easy to access as you finish gels or bars. That's pretty reasonable. It helps keep your pockets organized and helps keep you from littering on the course.