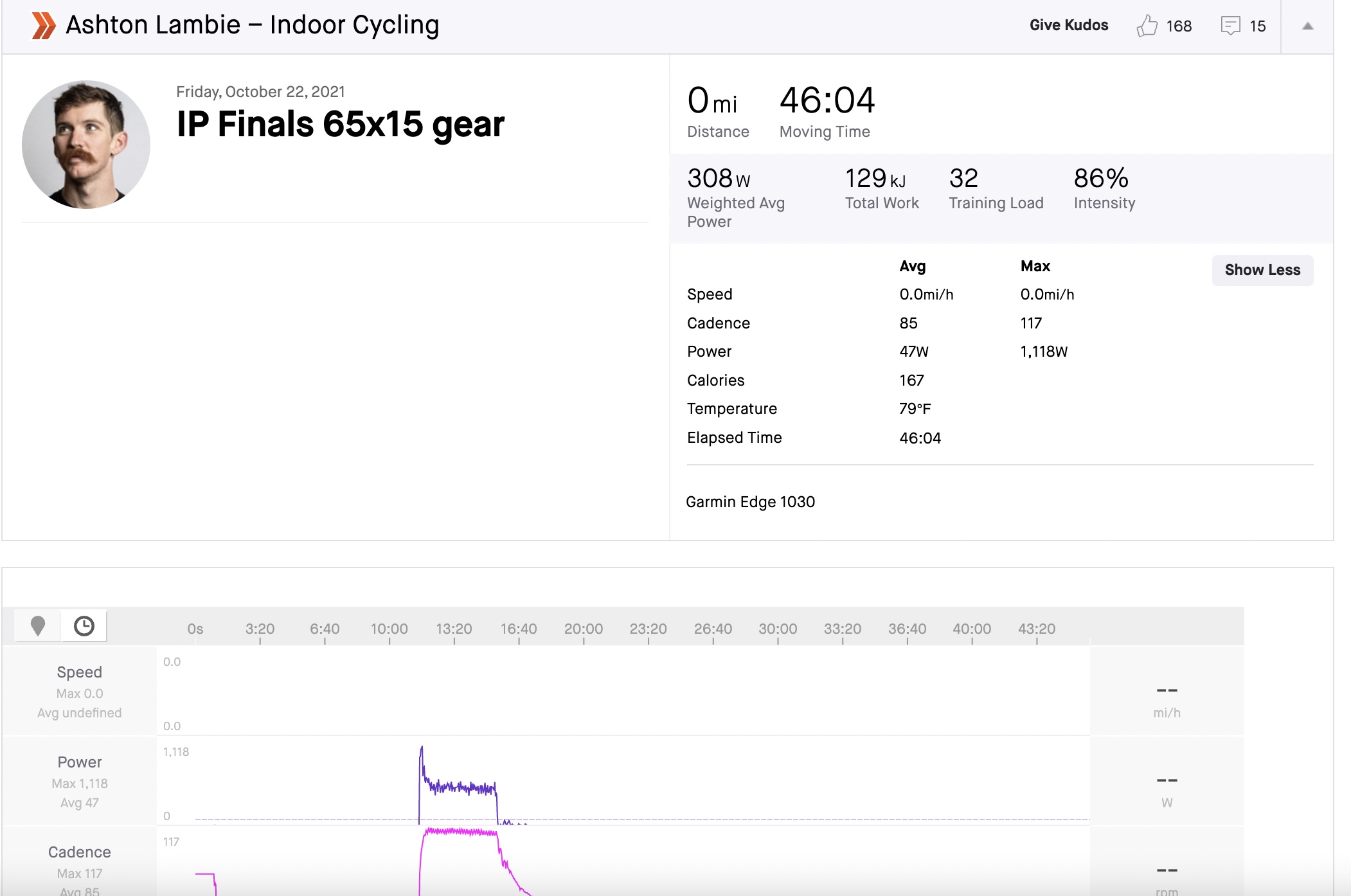 When Ashton Lambie joined Jukebox Cycling, we were excited about his renewed commitment to gravel racing, but we were also excited by his recent World Championship win in the Individual Pursuit 4KM race, which he won in 4:05.060, 1.089 seconds faster than his opponent. Lambie also holds the current world record for the 4000 meter. His effort was captured for (where else?) Strava, and we dug into the numbers to see what it takes to win an event like that, especially compared to the gravel events on his schedule this season.

You can check out his Strava file here and join the Jukebox Cycling Strava Club here.

"It was a little surreal,” Ashton says of his race. "Honestly, the World Championships this year [2021], were probably the least stressed I've ever been. I had recently broken the 4000 meter world record in Mexico, and my partner Christina said I should go to Worlds. But she reminded me that regardless of what happened at Worlds, she said, 'you are always going to be the guy that went under four minutes.’ I think not being stressed about the race made it better: a lot of times when there's no pressure, that's when your best results come.”

We asked cycling coach Peter Glassford to analyze Ashton’s Strava file, and here’s what he had to say:

“First, let’s start by putting that time into context. While not deep data analysis, I am always awestruck by the distances track racers can cover in these short events! 4 kilometers in about 4 minutes is just mind-bogglingly fast. Many people won't go that fast (>60km/hr or >38mph) while coasting downhill for 4 minutes, let alone pedal as hard as they can, while holding an aerodynamic position, and pedaling at a very high cadence!”

Was there something special about Ashton’s ride? Definitely.

"While some Individual pursuit racers will hold a more steady pace, it looks like Ashton attacks early to get up to speed,” Peter says. "Most riders would do well to hit the 5-second power (~1050w) in a standalone sprint, but Ashton does that, then follows it up with a world-class effort. He averaged around 520w or 7watts per kilogram with a cadence between 110-120 RPM while holding an aerodynamic position for just over four minutes. What makes this even more impressive is that he performed an almost identical effort to qualify for this final only a few hours prior.”

Remember, there are qualifying rounds he had to get through… and in fact, earlier that day, Ashton rode the same distance in an even faster time—4:03.237—in order to qualify for the final.  “Individual pursuits are basically a math equation,” Ashton says. That means not necessarily aiming to go as fast as humanly possible every time, just faster than your opponent, but timing it perfectly.

And after the qualifier came the big news… but not anything about the finals! "The funny thing happened after Qualifier round: I knew I was going to be going into the finals in a couple of hours, I’d just done well in Qualifiers. And Christina calls me to say that she'd gotten accepted in the astronaut program with NASA. In between qualifiers and finals. It was a lot to take in. You hear that, and you think, 'What are bikes? Why do bikes even matter? You’re going to GO TO SPACE.’ It’s a lot.”

(You can read even more about the race on VeloNews.)

You can watch the finish here:

“I think when I show up on the track—especially when I first started out—people were confused when they saw me,” Ashton says. “They thought I was just some weird hipster with a mustache and didn’t take me seriously. Then I started dropping decent times and everyone was like, ‘Oh, $hit."

The combination of cycling endeavors Lambie has tackled in his cycling career, from setting multi-day randoneuring records to high-powered world records on the track, sets him apart. “Our goal on Jukebox Cycling is to empower our athletes to pursue their goals—no matter what cycling discipline they’re in—and to help them explore what’s possible on the bike,” says Jukebox CEO Loredo Rucchin. “Ashton is the perfect rider to complete our roster: What he does in cycling is so inspiring, and it works so well with what our other athletes are trying to achieve. We’re thrilled to have him on board.”