Getting Started with #VanLife with Rachel Pageau 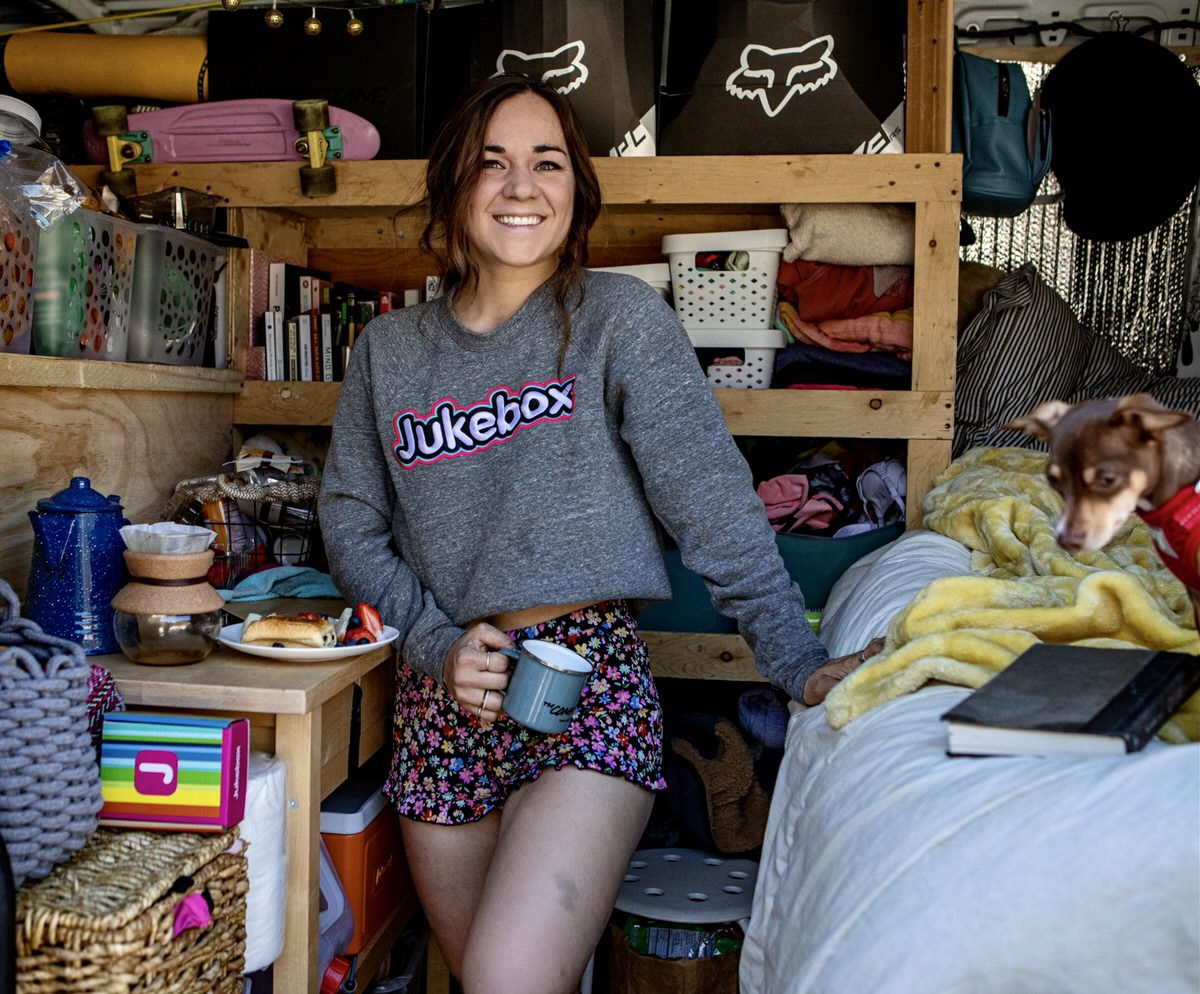 Canadian downhill racer Rachel Pageau just joined Jukebox Cycling as the first MTB-focused athlete on the wide-ranging multi-disciplinary roster. The former XC rider has been racing both enduro and downhill since 2016, and most recently represented Canada at the World Championships in Val de Sole over the summer. Now, she’s chasing North American races around the country in her van, joined by Ranger, her faithful pup before heading over to Europe for the World Cup season of downhill racing. Here, the 23-year-old is sharing her journey to #VanLife:

How is van life going?

Good so far! I was in Florida for a little over a week. And now I'm back in North Carolina. So I'm half in North Carolina, half in Tennessee. I’m in North Carolina on Monday, Tuesday, Wednesday, because I work at a cafe here, so then I get to do my work. And my coach and my training friends are all here. But then Friday, Saturday, Sunday, I go to Tennessee because the downhill bike park is there—it’s only two and a half hours away. I left Quebec after Christmas—it’s way too cold there now! But even here, in North Carolina, actually even Florida, it’s been cold. The last day I was in Florida, I had two jackets on and I was still frozen all day. Then I drove back here to North Carolina and there's still snow on the ground. So the first few weeks of van life are not quite as glamorous as expected. I don't have electrical yet, so there's no heat. It's bit interesting… That's why I'm spending quite a bit of time in Brevard, because I can plug my van in at the school and run a little electric heater. So that makes it a lot better. This weekend at the bike park in Tennessee, it was cold. It was 20 degrees at night. Ranger and I had to cuddle up to sleep and it was so cold. But it’s fun.

How’s sharing your Sprinter with Ranger?

Luckily, he’s very excited to be outside a lot. And he’s usually pretty quiet and calm.

And the van is new—what did you do before?

I used to have a Honda Fit, the tiniest little car ever. I would sleep in inside the Honda Fit very often, at almost all the races around North America. I would just drive my car, and set up a tiny bed in the back, right behind my seat. I’m very short. So it was just long enough that I could sleep sideways. It wasn't van life, it was actually worse! Even now, though, the van is kind of cramped because I got the shorter Sprinter so I could drive and park it easier. But with a motorcycle and bikes, it’s pretty packed. There's a lot of stuff in here. But essentially, van life is just an upgrade at this point.

What were you doing before?

I was graduating college in December, so before that I was living on campus in Brevard and staying in my car on weekends for training. I figured I needed to find a better solution for the Spring, so I decided to get the van. Renting a place down here doesn’t make sense since I'm always on the go. The van was a better solution. I'm at races starting next week, and I'll be at races non-stop. There's really no other way to do it.

Will Ranger come to all the races?

The plan is to bring him to as much as possible. He's not coming to Costa Rica, the paperwork is way too much and it’s a short trip. But all the races in the US, he's going come out. That's part of why I got the van, so we could go everywhere. I won’t bring him to the first Euro trip because it’s short, but the core of the season is all in Europe so I’ll be there for probably eight weeks. So I will try to bring him for that. My goal is to find some kind of camper situation so I can be on the road and live in it between races. The manager from Pivot also has a little dog, and he keeps telling you if I bring Ranger, I can leave him in the tent with him when I race, so I have a spot for him when I’m racing.

Do you mind the solo travel?

I do like being by myself so I’m able to do whatever I want. It's fun with other people, but it's always a little more messy. When I went to Florida, I was with friends. And although it's fun and I'm a very social person, I don’t like being on someone else's schedule. I hate skipping a training session because someone wanted to go out for food or skipping a training because we're running late for this or that. Essentially, I just hate skipping my training because for to me to get to the start line and feel confident, I have to know that I did everything. And until I was on my own on this trip, every week there was something that came up where I had to skip a workout. It was always good excuses, but excuses still don't get the work done. So I do actually prefer being on my own and getting all my stuff done. I still end up always being with people wherever I end up going, anyway. I’ll be riding with people or parking in the same place as people because the world is so small. And I'd say I'm pretty friendly. Even if I’m around people that I'm not best friends with, we're probably going to be friends within a day or two.

How are you making all of this work while living in the van?

So that is one thing that I'm honestly not proud of. In the last few years of racing, my sleep has always been something I've neglected and it's not great. Really. It’s not great. But at the same time, it makes me hopeful that if one day, I managed to be on a pro team, the amount of things that will be better for me is so cool. I know that there's still so much room for improvement. I'm already doing pretty good. But there's so much room for improvement all the time.

I think sometimes when you're doing everything perfectly and super dialed in, and you're barely seeing progression, it’s frustrating. For me, I have so much room to progress! Like I said before, last season, I was sleeping in a Honda Fit so you can imagine that it was not an ideal race situation. And now I'm sleeping in the van, but it's cold and most nights, I wake up three or four times in the night because it’s cold. So it’s not perfect sleep. And I don't have running water yet, so I'm running on a couple of water bottles which is also not great for hydration, or for cooking meals. My recovery is definitely not great.

But it is an improvement. All of last year, I was going to school full time and I was working 45 hours a week, just so I could get a little bit of money to go to the races. And then I was training 12 hours a week. I was obviously not recovering a whole lot: I was working at opening the coffee shop at 6:30 every morning, and I was working my other job—because I two jobs to make up the 45 hours weekly—from five to nine every night. I was also the RA of my down building, so I would have stuff to do for that, plus my classes. So , I would go to bed at 11 and wake up at 5:30 every day. And at first, it was horrible. And I just got so used to it. I don't think it was very good for recovery. But then, in a way, your body gets used to that.

However, it’s not sustainable. So this year, I’m trying to do better. With sponsors like Jukebox Cycling, I'm trying to invest it in having a more dialed program. I’m investing in myself first. I’m getting heating the van because I can't just get by on poor sleep as I’m going around to do these races. I’m spending money to eat better food. It’s exciting to go to the grocery store and buy more fruits and vegetables because I can afford it now.
‍

Staying clean in the van while traveling and training: How are you doing it?

Honestly? I'm not super worried about being a little smelly, though I don’t really smell. And I go to the gym almost every day for training already, so I just shower there. I got the a Planet Fitness membership, and they have gyms essentially everywhere, so it’s super easy to take advantage of that. There’s even one by the bike park so I can just go there after a session. I admit, the restroom situation is a bit more difficult and I’m trying to figure it out now.