How Ruby West is Coming Back from COVID-19 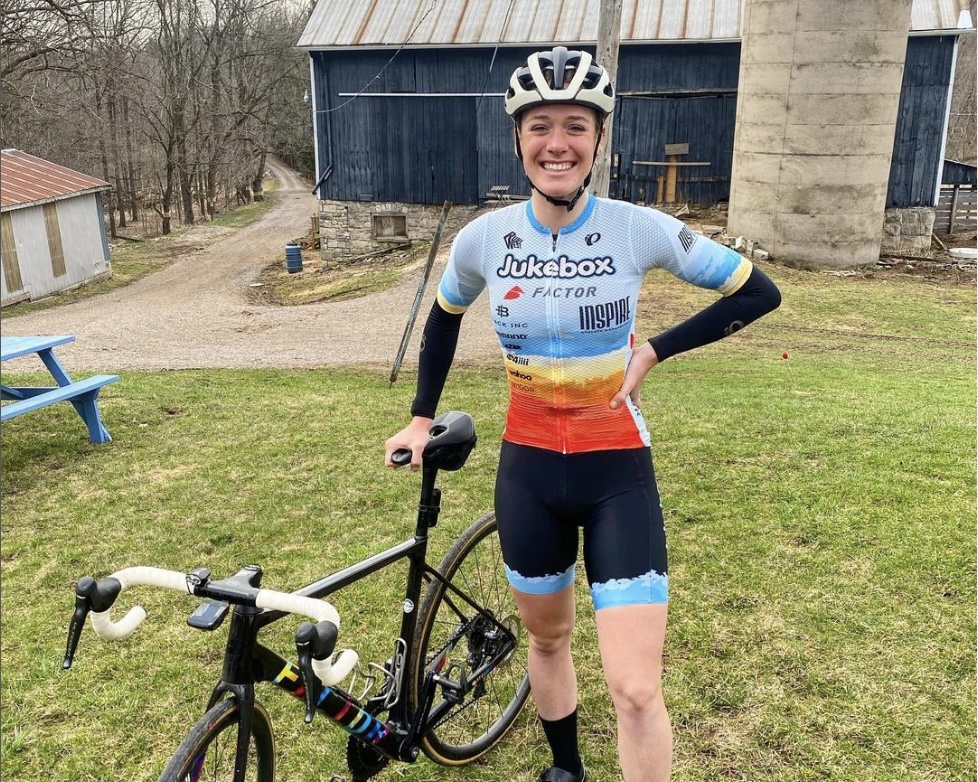 Our track and cyclocross superstar Ruby West had a great start to the offseason, but before she could toe the line at her first race, she woke up feeling a little ‘off.’ Yep, it had finally happened: Ruby had COVID19. After two years of avoiding the virus, it was here. Luckily, her symptoms were relatively mild, but the recovery process and returning to racing isn’t something she plans to rush. We caught up with her after her first week in isolation to see what her plan is—and what you can learn from her plans to get back to the start line at the track World Cup in mid-May!

It’s been a few days since you were diagnosed: Are you feeling back to your old self?

I would say I’m at 98%. We definitely got it bad. But I'm cautiously optimistic: I feel great now, but I also haven’t trained in two weeks, so who knows how that's going to feel? I was happy that I tested negative and was able to go volunteer at Paris 2 Ancaster, even if I wasn’t able to race. Going back to spectate reminds me of going to watch my dad race when I was a kid, and it was so fun to see all everyone again. So despite being bummed to not race, it was a super good time to just be there.

Did you have any FOMO not racing?

For sure. But then again, I also was able to wake up at 7:30 instead of 4 AM! Of course, as the day went on, and it got super sunny and warm, then I was a bit sad. Seeing Maghalie Rochette just flying out there, I kept thinking it would have been fun to race with her. But getting to talk to people at the finish line made up for it. And while it hurt to miss it, it wasn't like my big goal of the season.

In a weird way, does it feel almost like a relief to have gotten COVID?

That’s exactly it! Over the last like six months, I've been like, 'Okay, it's pretty clear that everyone's just going to get it at some point. So let's get this over with.’ And I was really worried that it would hit at a bad time, so really, this isn’t too bad since I have time before my next race. Obviously, I've still been very careful with COVID, wearing a mask and everything, but I knew deep down that I’d end up getting it at some point. A lot of riders I know have been getting it lately as well. Now that I’ve had it, it’s actually more relaxing because I’m not worried about getting it and not being able to race! You don’t really realize how much something like that’s been weighing on you until it happens.

How did the whole ‘finding out you have COVID’ go?

For two years, I've been paranoid about getting it, which means every time I have a slightly itchy throat, I'm like, 'Oh, I have COVID.' And I do a rapid test. And it’s always been negative. But this time, I was absolutely 1000% sure it was COVID. I had symptoms, I didn’t feel great… But at first, I tested negative! Then, my boyfriend Derek, who had no symptoms, was feeling a little tired, and I still felt sick, so he took a test. Immediately, the line popped up that he was positive. Funny enough, that made me feel better because I was honestly feeling a little gaslit by this test that was telling me I wasn’t sick. I did another test after he tested positive, and the tiniest, faintest line finally showed up. That was enough to confirm it, and we immediately stopped training and started resting.

Of course at first, we decided that we would make the most of it and organize and get a ton done. That attitude stuck around for a day or two. And then I started feeling really bad. For three days, I was basically just sleeping or laying around watching TV. I wasn't awake a whole lot. I was taking two to four hour naps and sleeping throughout the entire night. So you know, I would get up. Maybe get some breakfast. Maybe close my eyes for a little bit. Wake up at noon. Get some more food. watch some Netflix. Go back to bed. There wasn't a lot of hours of the day, but definitely a lot of Netflix.

How did you make your return to training plan?

We've heard enough horror stories that we know it’s super important to be careful coming back. I know a bunch of racers who had it, didn’t have symptoms, but still have long COVID several months later. We both took a few days entirely off; I think I took six entirely off from everything. After a few days, I was back on the bike doing some really short, really easy spins on the trainer, but I knew I needed to wait at least 10 days before even starting to build back up. I’ve been trying to really listen to my body as I do start to come back. If I feel fatigued, I’m not even going to spin—it’s not worth it. A nap will serve me better. There are athletes we know who’ve come back from COVID and developed heart problems, and that’s just not something to mess with. It’s frustrating, but I know a few more off days on this end could save me a lot of heartbreak down the road. Possibly literally!

What about once you started feeling better?

Derek loves to reorganize rooms. So once we had a bit more energy, we did do some organizing and moving furniture around. We've taught our cat a few tricks. We walked him on the leash out on our porch a little bit. But I wanted to catch up on school and work stuff, but even when I wasn’t tired, I still didn't have the energy to respond to an email. There was like a lot of brain fog that took longer to go away. I had exams to study for, but I’d read for 10 minutes and not absorb anything.

How does this does it change your racing calendar, or does it?

A lot of that will depend on how I'm feeling when I get back to regular training and I’m back for a while. It's really easy to say, 'Oh, I feel fine now' when I’m only doing an hour spin. But when I'm on the track with all that stimulation and effort and everything else that goes into it, I don't know how that's going to feel. I've had a few teammates say it's taken them a little bit longer than they would hope. So I'm going to be patient with it. I am going to the training camp that’s the last prep for the Milton World Cup. And that World Cup, of course, is obviously dependent on how the training goes for the next little while. But that is the only big target for the next little while for me. I'll also need to do a little bit more volume to top up from all the missed training, so it's kind of nice that I don't have too much planned right now. That allows me a lot of flexibility to kind of build back in the way that that makes the most sense.

And Milton World Cup is May 12—coming soon!

Yes it is! I'm relying on the fact that I'm incredibly rested right now.