How Ruby West is Prepping for Cyclocross World Championships 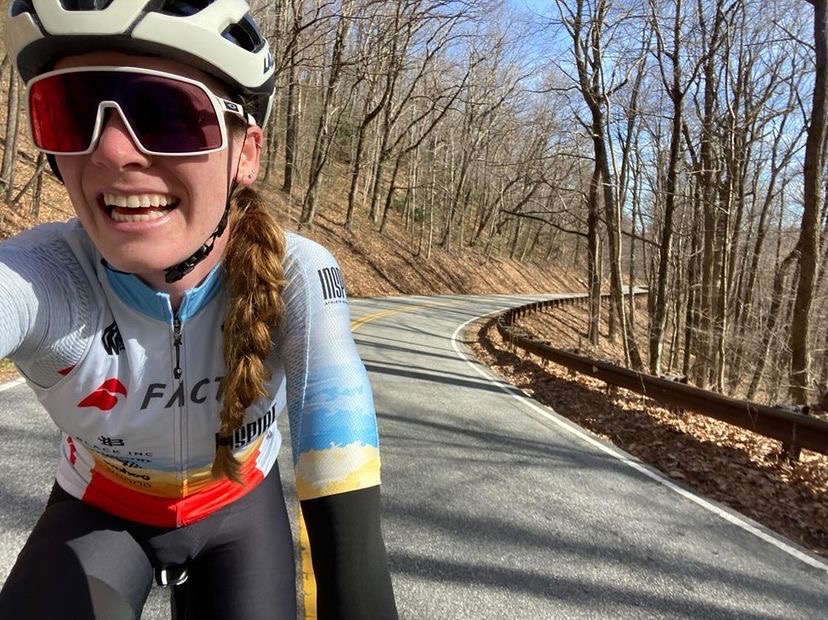 In two weeks, Ruby West will be on the start line of her first elite World Championships for cyclocross. She’s had a lot of success in the U23 field in the past, with a ninth place in 2020, and this season, she finished second in elite Pan-American Championships. As she gets ready for the race, we caught up with her to talk about all things training related, from intervals to skills practice to running to mindset heading into the race.

Before we talk training, how is Worlds preparation in general going?

It’s overwhelming, to say the least. With the current travel advisories and everything, it’s really nerve-wracking. In Ontario, we have lockdowns going on now, and I’m in North Carolina to get in a training block ahead of Worlds since I didn’t go to Europe to race. I've been working with Jeremy Powers [former US National Champion in cyclocross] for the past couple years, and we have a pretty good idea of what works for me. Two years ago when I had a good result at Worlds, we had a training camp in Spain right beforehand. We’re trying to replicate that as closely as possible, with a two week block, but without overdoing it, because a lot of people do camps like that and tend to go overboard and end up sick.

So what is this block going to look like?

The first week is a focus on endurance riding, getting some long rides and efficiency back in the system. But not pushing huge hours. After that, I’ll do some more intensity. Where I’ll be in North Carolina, I have a lot of friends who are mountain bikers, and they have a cyclocross course, so I’ll get to do a lot of off-road training. I want to get some intensity off road because obviously, that is one thing we're lacking in Canada in the winter. I can do all the intensity I want on the trainer, but I miss the feel of the bike on the dirt.

Cyclocross is so skill-based. How do you work on honing your skills?

There's no cookie cutter skills workout. For me, they're different every time, based on what I feel I need at that point and how confident I feel in some areas. Last summer before I moved to Europe, I built a bit of a cross course on my property here. Obviously, with the snow right now, it's not easy to do anything on that. But in the summer and into the fall, I would do workouts on the property where I would just do hot laps of the course. That way, I was getting intensity as well as the technical training. Now, I do a lot of skills practice with dismounts and remounts. Often, Jeremy will work that in with a running workout for me, so I’ll be riding on the trail and have 20 running sprints where I’m dismounting, running with the bike, remounting, and getting back up to speed. It’s really helpful for building that fatigue and then also doing those skills while tired. At the start of the workout, I'm fumbling a little bit and by the end, the fatigue is building but I'm clipping into my pedals right away and doing that stuff a little more smoothly. I also just ride my cross bike off road a lot. Drills in fields just don’t motivate me, but riding my bike off road, and sometimes taking it on trails where it probably shouldn't go on, pushing it to its limit and myself to my limit, really helps me grow. I love seeing things in training that you're never gonna face in a race.

Do you ever struggle to get the motivation to focus on skills?

Definitely. I also do my rides outside whenever I can, especially when it’s cold or wet or rainy. Because we’re going to race in those conditions. So even when I’d rather be in on the trainer, I’ll go out and push outside of my comfort zone. The biggest problem with technical training is that there’s no immediate feedback on your success. Sometimes, technical workouts are the hardest workouts for me, because I'm very, feedback driven. So when I'm going out and riding around doing those skills, I might notice a difference, but I can’t see any numbers to correlate with it, so sometimes it’s harder to feel motivated.

You mentioned running with the bike, do you ever run without the bike?

I do—but I've been a runner for most of my life. My body tolerates it pretty well, and so I consistently try to run year round just to keep my body in shape and maintain that running capacity. And in Canada, it’s nice to have that as an option in the winter. Last week, I had a workout where if it was nice out, I could do my intervals on the bike outside, but if the weather was bad, I would do a run and strength training. I admit, I get a little grumpy when I can’t just do intervals on the trainer instead, but it wouldn’t be the same quality. And I had a really good run in the end: it was terribly slippery because of the snow. But that's the sort of stuff you're going to face in a race: You're never going to have the perfect flat rail trail of perfectly packed grass to run across during a race. Running in snow is really, really applicable to running in mud. And so I find that that's a really good cheat code for preparing for that. Plus, you stay a lot warmer running outside in conditions like that versus riding!

You also mentioned strength training, what does that look like for you?

Through the Canadian track program, we have a great track-specific strength coach. He's been very accommodating to my cyclocross schedule: He took the time to understand what cyclocross is and what my race schedule looks like. He's really been helping me with the periodization of my strength programs around my racing. Last spring was the first time that I've been consistent with the gym, because on the track, strength is a huge part of training. I saw a huge benefit in my cycling pretty quickly. During the pandemic when I was in Europe last year, we had to do more body weight stuff because gyms were closed, but luckily in Ontario, I have access to weights even when the gyms are shut. Especially with racing less this year, it's been really helpful for me to have access to my gym, so I can really get that quality training in. Consistency is so important with strength training! I see so much improvement when I’m able to stick to the program consistently, and it translates to the bike really well…. But not the next day. The day after strength, I feel crap, but in general, it feels good on the bike.

Do you focus on just lower body, or do you mix it up?

I pride myself on my upper body. That's weird to say because honestly, I'm still a noodle, but compared to most cyclists, I would say I still have my swimmer’s shoulders that are very wide and strong. I've always prided myself in being able to do a few pull ups. It’s not that I do a ton of heavy upper body stuff: Last week, I was doing weighted push ups and it was only five reps with 10 pounds  on my back. But that's still a significant load! Most workouts have a couple upper body exercises.

And arm strength must help for track and cyclocross, right?

It's actually super important. Because if you're fatigued from carrying your bike in cyclocross, how are you going to be able to put it down and go accelerate? It's important for the track for starts to have stability in your upper body. We also do a lot of planks with compound movements that are for core stability. I notice when I'm not working my upper body, I feel noodle-y on the bike.

How are you feeling with Worlds coming up, since Nationals was cancelled and you haven’t gotten to race since Pan-Ams?

It's intimidating, for sure. But I knew all along that I didn't want to race as much this season. I could have gone to Europe, I could have raced more, but I made the decision that that wasn't what I wanted. I think being confident in those decisions has helped me mentally a lot. If I was sitting here and thinking, ‘I wish I went to Europe,’ it would be hard. But I knew what I needed. Knowing that being home and training, and being around my loved ones, was going to fill my cup a lot more than being in Europe and getting those race starts. So I am pretty confident in the training I've been doing. I think that there are a few different approaches you can take to racing cyclocross. And obviously, the conventional one is to race every weekend, and that works for some people. I know that it has worked for me, but I think that just because it does work for me, doesn't mean this way can't also. I’m also reminding myself that Worlds is just one day. Even if I raced the whole season, and had a great season, I could still have a bad day at Worlds. Or if I didn't race all season, I could still have a good day at Worlds. You can't blueprint success in cyclocross. You can only try your best based on what's worked previously for you. And you can’t underestimate being happy and being motivated.