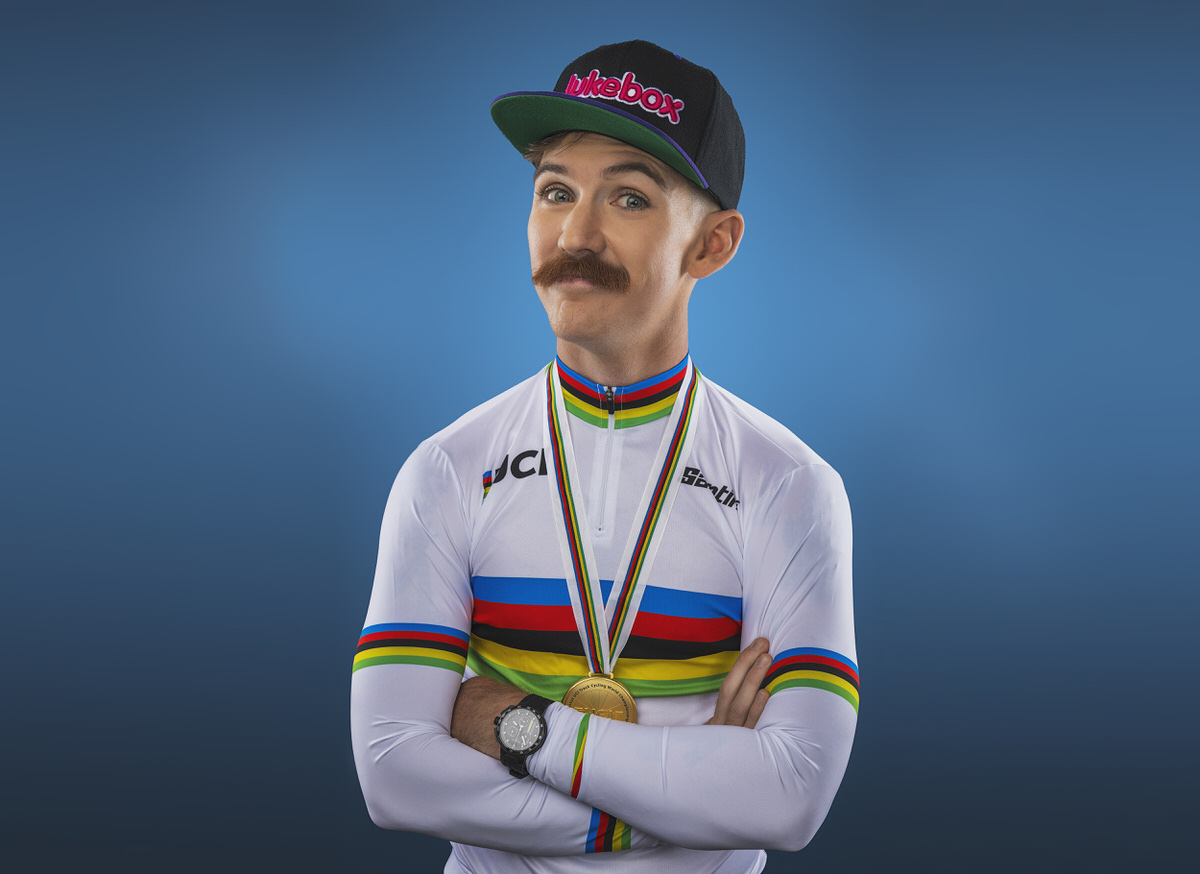 Jukebox Cycling was founded to help multidisciplinary cyclists do extraordinary things on the bike, so it makes perfect sense that track World Champion, gravel grinder and international mustachioed sensation Ashton Lambie would join the roster of world-class athletes.

At 31 years old, Lambie recently became the first American in over a decade to win Men’s Individual Pursuit World Championships on the track—after being the first to ride the 4,000 meters in sub-four minutes for the World Record earlier in the season—and now, he’s ready for a new challenge. This season, he plans to focus more on gravel racing, one of his first loves in cycling, while giving his track bike a break.

The enormous range of cycling endeavors Lambie has tackled in his cycling career, from his sub 24hr cross-Kansas record to the first sub-four minute World Record on the track, set him apart from other racers. “Our goal on Jukebox Cycling is to empower our athletes to pursue their goals—no matter what cycling discipline they’re in—and to help them explore what’s possible on the bike,” says Jukebox CEO Loredo Rucchin. “Ashton is the perfect rider to complete our roster: What he does in cycling is so inspiring, and it works so well with what our other athletes are trying to achieve. We’re thrilled to bring him on board.”

Normally, you wouldn’t resort to Wikipedia to describe an athlete, but Lambie’s page is hard to beat. It reads: “The American track cyclist is known for breaking the individual pursuit world record three times, and also the Trans-kansas record, and for his moustache.” In addition to that most recent win, he won the 100-mile edition of Unbound in 2019, and finished on the podium at Track World Championships in 2020. He also has an impressive collection of Pan American, UCI World Cup, and National track titles.

Reading about Ashton’s recent wins and palmares may make you think that he just appeared out of nowhere in the cycling scene, but that’s not the case.

"I think that story plays really well, where it's like, ‘Oh, I just jumped off of the couch and won my first national championship,’” he laughs. "But I actually, so I've been riding bikes on and off since 2005 when I found my dad's road bike hanging up on a wall. I rode a century later that year, and then did some did some road racing for an amateur road team out in Nebraska when I got to college and realized I wasn’t built for running. I got really seriously on the road, but realized that I didn’t love it, so started shifting to the ultra-distance riding. I ended up in Kansas, and started racing gravel there because that’s what people were racing.”

“Gravel racing went well, and I won a lot of local gravel races. But I've always been pretty stocky compared to other racers, and I put on muscle pretty easy. And so in the back of my mind, I kept wondering if there was a cycling discipline that was a little bit more power oriented that I could do. Naturally, that meant I started racing track. I raced the grass track in the summer of 2016 in Kansas. And then I came up with this plan to try to go the Olympics. And so I had this whole path planned out of like, ‘Okay, I need to get my USA Cycling upgrade at this point. And then I'll go to World Cups, and then I'll go to World Championships, and then I'll qualify for the team. It was a pretty accelerated plan, considering I won my first national championship in 2017. But I was learning a ton, and I was able to do my first World Cup with USA Cycling in the the winter of 2017 and then my first World Championships in 2018.”

Then, the Olympics fell through—but put Ashton in a position to pivot to his World Championship win. “At first, I was doing Team Pursuit, because individual pursuit is not an Olympic event. And so when I was doing Team Pursuit, that was 100% my focus. Sure, I got better at individual pursuit, but it wasn’t a priority. But then, we realized that we weren’t going to make the Olympics with our team, since they only take the top eight teams, which we knew by winter of 2019. That was a huge a huge emotional letdown.”

How did he handle the letdown? Riding, naturally. “Part of my catharsis of working through that was to ride from Glasgow 500 miles across the UK in freezing cold and pissing rain. Then, I just started working full gas on individual pursuit.

This season, Lambie’s gravel focus will include Gravel Worlds and the Life Time Grand Prix Series as well as brevet-style exploration of his new hometown of Houston, TX with his partner, Christina Birch. Lambie will be the fourth Jukebox Cycling rider to take part in the Grand Prix, along with mountain biker Dylan Johnson and former road pros Alexey Vermeulen and Adam Roberge.

"UnBound and Gravel Worlds are two events I've really loved doing in the past and I'm excited to do them now,” Ashton says. "I'm really excited to get back into gravel and do those main events—but I’m also excited to do some of these events I wouldn’t normally do, like Leadville. If that wasn’t part of the Lifetime Grand Prix, I probably would have never done it, I would have stuck with the Midwest gravel races that I already know. But it's fun to get to learn new things!"

Lambie’s track and gravel palmares helped him get selected as one of the riders in the Series, and Life Time’s president of media and events Kimo Seymour told VeloNews, "It will be so incredible to see the guy that just set the world record in the individual pursuit on the track show up and do Leadville.”

Lambie also hasn’t ruled out any other type of racing, though at the moment, his main focus is on mountain bike skills, which will be critical for the Grand Prix Series. And of course, he’s still jumping on the trainer to lead some Zwift rides and races to keep his legs sharp!

Off the bike, the music performance major puts his business administration minor to use and works in bike advocacy. "I've always been just really passionate about bike advocacy,” Ashton says."I find it to be incredibly fulfilling to help people achieve whatever they want to on the bike. If someone has a goal, whether that’s competing in a local race, getting the KOM on their local climb, or riding to work one day a week, I love having the knowledge and having the experiences to help people achieve those goals. It's something I'm super passionate about.”

And in terms of why he’s working with Jukebox Cycling this season? "I think the structure that Jukebox Cycling has, where it’s a team and the riders can feel connected, but at the same time, have their own sponsors and set their own calendars, is a great model for the cycling world today,” he says. “It’s bringing the standard up. And as disciplines like gravel are growing, the team structure for cycling in general is going to change—the traditional models just don’t work anymore. I love that maybe we won't get everything right the first time, but that we’re on the forefront of this change, and I just love being a part of that."