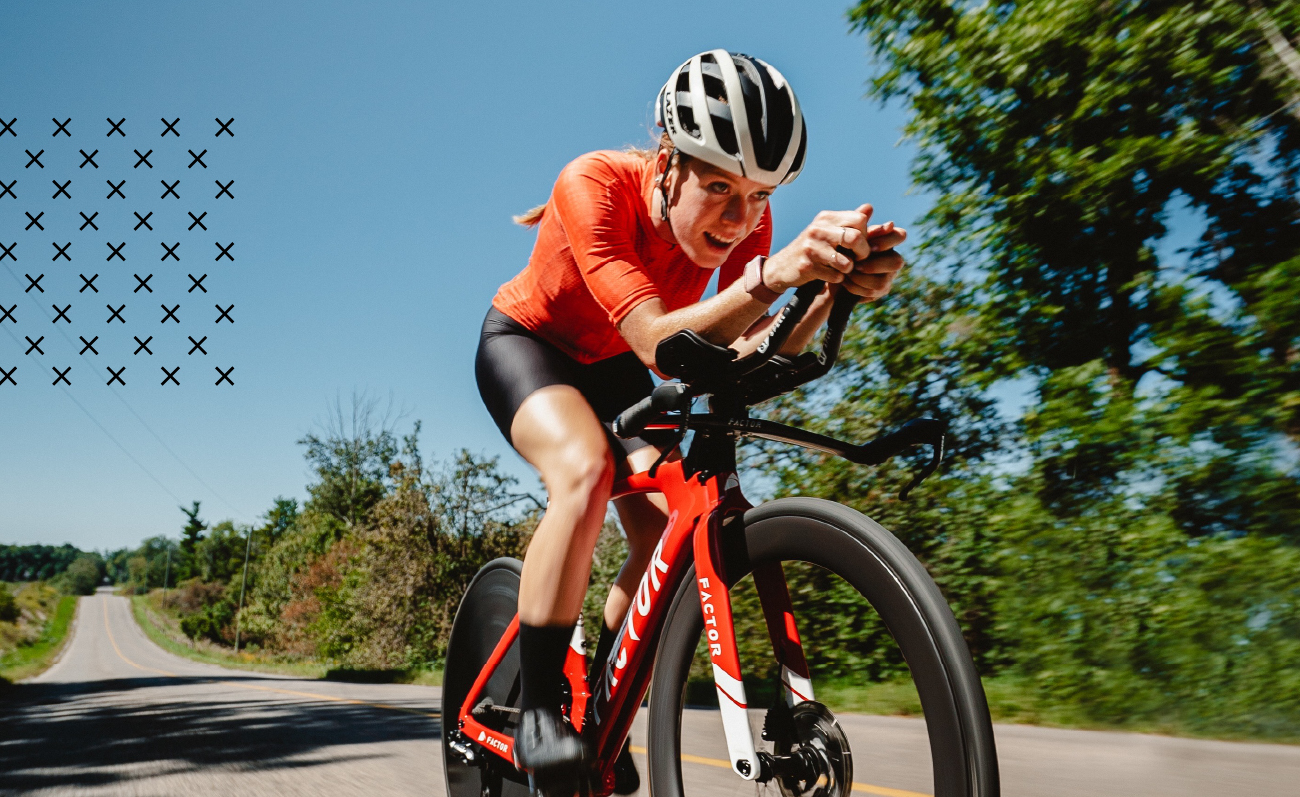 22-year-old Canadian Ruby West was born to be an athlete—seriously, her dad was an Olympic swimmer!—but rather than dive into the pool, Ruby fell in love with cycling at a young age. Her career started in cyclocross, with three Pan-American and three National Championship titles, and recently, she’s added track racing to the mix while still managing to squeak out a second place finish in her first cyclocross Elite Women’s Pan-American Championships. With a schedule that’s packed with World Cups and World Championships on the track and the ‘cross course, she’s still making time for rest and recovery, and a few hot laps with her family’s latest farm addition, a donkey named Gracie.

You were fully focused on cyclocross until last year, when you added track to the mix. How did this 2021 season play out, balancing the two?

Cyclocross isn’t nearly the team sport that track is, obviously, and I really love the women I train with on the track right now. The cyclocross scene is amazing too, but in a completely different way. Track is so calculated and controlled while cyclocross is completely wild. It's definitely been an unconventional year. I started racing cyclocross later this year partially because I started with the Canadian track team last year. This year was my first year of going all in for that and trying to make the World Championship team. Because of that, I missed the first few cyclocross World Cups, but did a bit of a hodgepodge of cyclocross racing in New England, then did Pan-American Championships in Texas before coming home for a bit. That was a whirlwind of a trip! I finished second in the elite women’s race—my first Pan-Ams as an elite—and it hasn't really sunk in yet. It was a different style of racing, very dry, fast, hot racing. The opposite of what I was coming from in Canada! But all of the travel has been really stressful, obviously because of the pandemic. So now, I'm home for Christmas for the first time in years. I'm so excited! I'll probably be doing some just training on the track, then hopefully go race Nationals if they happen in January. After Nationals mid-month, I'm going to try and go somewhere warm for a little bit, put some work in before Worlds, and then race World Championships in Arkansas.

What made you want to lean into racing on the track?

That's a great question. If you asked me a year ago, I probably would have said nothing would make me like it! But I actually have found some enjoyment in it, even though it's been a really challenging ride. I was friends with a lot of the old Canadian national team and lived 40 minutes from the national track training centre. I rode with a lot of them even before I was training on the track, and they are just a great group of girls that I really enjoyed being around, plus my boyfriend's part of the men's track team. Really, I was ingrained in the track team without actually being a part of it. A lot of the team retired after the Tokyo 2020 Games, so the national team coaches were trying to cast a net wider for the next cycle and invited me to train with them. At this point, I decided I had nothing to lose by trying!

Track also puts the Olympics on your radar: Is that a priority?

Having seen my boyfriend Derek go to the Olympics on the track this year, it really made me realize how tangible it is, the importance of the Olympics. I've been surrounded by the Olympics my whole life: my dad went to the Olympics as a swimmer. I think what I realized this summer when Derek went to the Olympics was that there's so many people who will never know someone who goes to the Olympics. For them, it’s this far away thing. And for me, my whole life, I didn't understand that, because the Olympics have always felt really close to home for me. It kind of desensitized me to it because it was just another competition that he competed in as an athlete. But this summer, seeing it even more closely with Derek and other people I know well over there competing, I had the realization that I want that too. It made me realize that I'd be kicking myself in 2024 if those people I train with off the track were all at the Olympics, and I'd never even given it a shot. For me, track is the most feasible route to the Olympics, unless they add winter cyclocross!

With an Olympic swimmer as a dad, was triathlon ever on the table for you?

There was one. It didn't go so well…. It was the Barrie, Ontario, Kids of Steel triathlon, and it was a disaster. It wasn't my style, for sure.  I like running off road at my own pace. I like cycling on its own. But the big problem, actually, is that I absolutely hated swimming. I’m atrocious. My brother and I grew up assuming that we were meant to swim because of our dad—like swimming was in our blood and we’d naturally be amazing. So, we told my dad we wanted to start swimming when I was 7 and my brother was 10. And my parents were like, 'Are you sure?' And my dad, who had been completely burnt out on it at the time that he left the sport, was like, ‘Don't do it. Don't do it at all. It's a trap.’ But of course, we did anyway. We joined a local swim club and I think I spent most of the swim practices in the shower hiding out. Dad was right: I hated it so much. I'm a really social person, so having my head down in the water for two hours at a time was not the best. It didn't go so well. I was in between strokes trying to talk to my friends. Backstroke was great because I could chat!

Speaking of being a social person, how have you handled the isolation of COVID19 in the last two years?

It was certainly a testing year for me last year. I moved to Europe with a cyclocross team and it was the most challenging experience I've ever had. It was incredibly isolating, and there was just a whole lot that went wrong in the setup. I’m still processing that last season, to be honest. A lot of it comes down to struggling with isolation because I certainly am a social person. At home, I live with my boyfriend and our cat, and my parents live just up the road on the same property. I'm very close to my family and my friends, and so moving across the world alone was certainly a challenge especially into a country that was entirely locked down. I had new teammates I wanted to hang out with, but I couldn't even go to a coffee shop with them. It was, ‘ride your bike, go to the grocery store, and go home.’ That definitely took a toll on me. But I found being back at these American races is that here, I have such a deep sense of community because I know so many people at every race. It’s such a welcoming community compared to the elitism of Belgian cyclocross. Last year, I was thinking that maybe I didn't like cyclocross anymore, but this year confirmed that I love racing cyclocross, I just didn’t have the right situation over there.

Would you go back to Europe to race?

I'm not shutting the door to it! I just know for sure now I don't want to live there. But I can definitely see myself doing some racing blocks in the future. I think for me to be successful over there, it's important to do condensed periods and not just sit there for three months wallowing.

You mentioned living on a farm—have you always been interested in farming?

It’s a big part of my life: this place is my little slice of heaven, and I think that's what made going to Belgium last season so hard. I love my life here. Growing up outside of Hamilton in Ontario, we had the city right there, but I was this country kid, and where we lived backed onto this huge field that we were allowed to basically use as free range kids. We would have had some incredible adventures out there. It felt like the world was ours. We spent every day, all day outside. It really drew me towards gardening because we had this huge garden that my mom and I would work on together. That was a huge part of my life. When I went to university, my parents decided to actually buy a real farm—just down the road from where I grew up—and at first, my brother and I thought they were making a huge mistake. But once I was there for a couple weeks and really embraced this place, I can't imagine living anywhere else! It's 40 acres of just pure bliss. You're in your own world here. We have cows, goats, chickens, dogs, cats, and our newest addition is a donkey named Gracie. She is my pride and joy. I love it here because there's not enough hours in the day, and there's always something going on. Right now, we’re renovating the barn. Being here has really made me realize what I value, what's important to me and what makes me happy: It’s being in this place that really makes me feel alive and connected to nature.

What made you want to be part of Jukebox?

It’s been a dream come true. Jukebox has such a supportive, excited staff of people who love cycling as much as I do, with other riders who are doing amazing things in the sport, it’s just perfect. It’s exciting to talk to people who really genuinely love cycling.