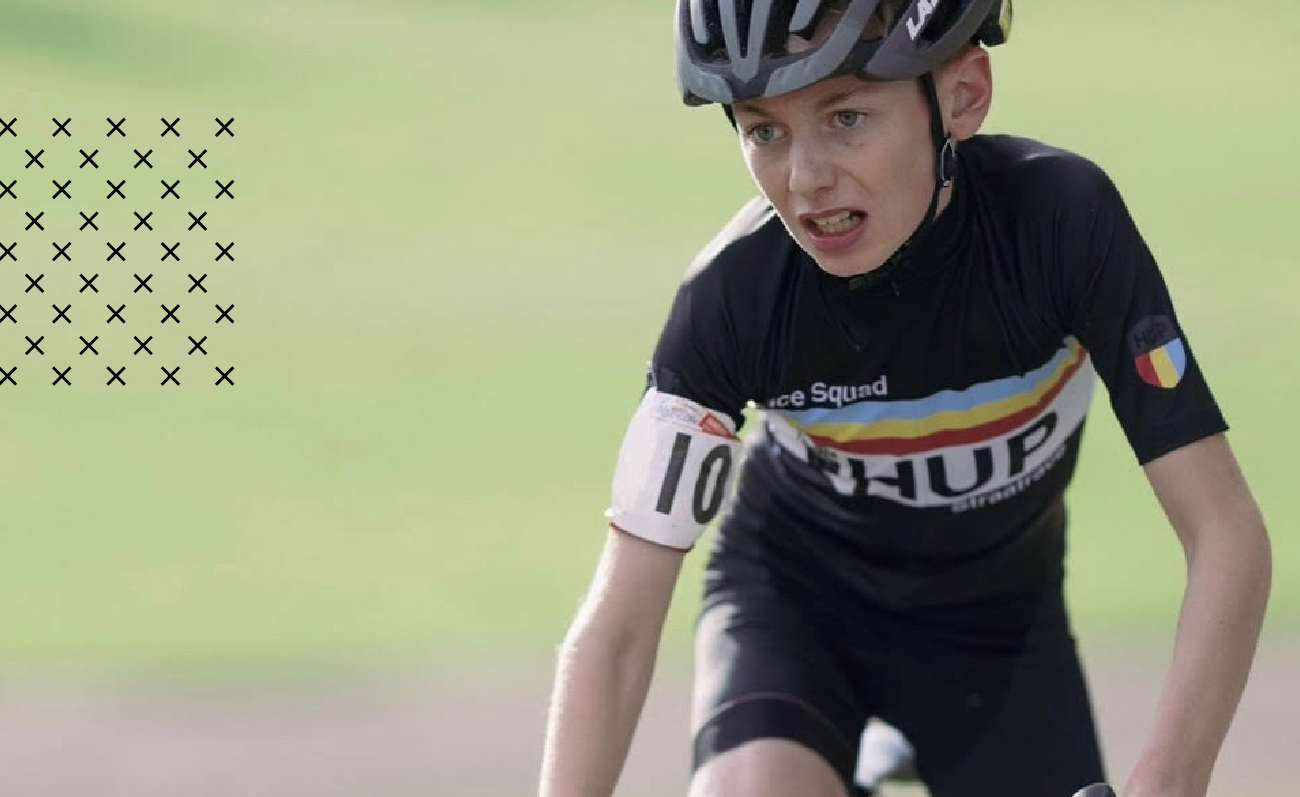 If you haven’t heard of Xander Graham yet, you must not follow pro road racing. Sure, he’s only 12, but he still managed to sprint up a hill at the Tour of Britain so quickly that the race leaders couldn’t quite keep up with him. That moment on the hill might have put the spotlight on Xander as one speedy pre-teen, but even without making it onto Jumbo-Visma for a day, he’s got plenty of palmares to brag about. He’s the reigning Scottish Cyclocross Champion, and despite his young age, he’s got big plans for a pro cycling career—and for a career as a social media consultant. (Check out his Instagram and you’ll quickly see why!)

You just won Scottish Cyclocross Nationals in your age group, how was it?

The course was really technical! I think it suited me, and I was able to take advantage of that to get the win.

At the moment, it’s cyclocross, but I think it’ll change when road season gets here.

I started off when I was one. My dad got me a balance bike so I just pushed around on that. Then when I was two, at  Christmas my mom and dad bought me a pedal bike with coaster brakes where if you pedal backwards, it stops. So I started riding that. Then when I was a bit older, I started mountain biking because there weren't a lot of road races or anything like that for my age. But five minutes away from our house, there was a local MTB park so we went there to give racing a try. My sister was racing too, and I did pretty well for my age and just really loved it.

Tell us about the Tour of Britain hill climb this year!

So that morning, I had one of the British road championships. I went there and raced in the morning, and I came second in that. And we already had a plan to go to watch the Tour of Britain climb that's a bit down the road. So I was just riding around and rode up next to the pack, and one of the riders handed me his bottle. I didn’t think much of it, but my mom and dad were in a restaurant and started getting some messages saying I’d just been on TV.

Even then, it was cool but we didn’t really think it was a big deal, but then a video went up on Instagram with me getting the bottle handed to me and more and more messages started coming in. The organizers of the race contacted my dad to see if we wanted to come to the last stage, and sent us VIP tickets so we could meet the riders on Jumbo Visma. They signed me as the young rider for the day and I got to be on the podium with them and they gave me a signed jersey.

How has it been showing up at races since then?

It’s definitely a little strange now. In Britain, I race the under-14 category which means I’m one of the youngest riders there. It’s a little tough since a lot of the kids are bigger than me! I love climbing: I'm really really light compared to everyone else at the races right now.

Do you get nervous before races?

I don’t get too scared in the races in Britain because I’m so young in my category, and that means I know I’m probably not going to win, so I've not got any pressure on me. I just know I’m going to go out and ride my hardest. But at the Scottish cyclocross Championships, I was feeling nervous that I needed to win it, because I felt like I definitely could win.

What do you eat during and after rides?

I like the Pro Youth Nutrition bars, and I really like when we get to stop for a hot chocolate or something during a ride! After, we usually try to do rides so they end at mealtimes, so we’ll have mac and cheese, or pasta with sauce, or chicken and rice.

What do you do when you’re not racing?

I play on my BMX bike! I have a small BMX that's called the mini rocker, the tires are really small. I go to the skatepark with my friends and play on that, and we play on my Xbox too. And we watch racing.

Which pro race is your favorite to watch?

I love Strade Bianchi. That climb at the end, it was just amazing watching when Van der Poel attacked and no one could stop him. I would love to be there. We watch all the races as a family and with some of our friends. We watch cyclocross and all the big road races.

You do a lot of the racing with your dad there supporting you: Are you really close?

We spend a lot of time traveling all over the UK—we travel every weekend! That means we spend probably 40 hours in a camper van every weekend, just traveling the length and breadth to the whole of the UK. We’ve really gotten to know each other super well. I love being able to look back and see these places we’ve been.

What do you want to do in cycling as you get older?

I’d like to be a pro cyclist. And if that doesn’t work out, I want to ride my bike and keep making content like Instagram Reels. And I’d like to work for a pro team, maybe doing social media for them. As long as I can ride my bike!

My top tip with social media is to post consistently. I like Reels and TikToks since if you use trending hashtags, people around the world can find you and see what you’re doing. And I really like experimenting with photography.

Goals for next season?

I don't know our plan yet exactly, but I've got some goals to accomplish in 2022. It’ll be my second race season for cyclocross and mountain bike, and I want to defend my Scottish National Championship title for cyclocross. I’d also like to get some top 10s in mountain biking since I’ll be racing older riders.

We were excited when we heard about it and who else was going to be on the team. I really like Dylan Johnson’s YouTube videos. I talked to him about the team and I was really excited that I’d be on a team with him and everyone else! I really like that the team is open to whatever disciplines we want to try, since I have so many things I want to do, like gravel and sportifs and things like that. And I like doing my own stuff too. I did 200 kilometers on rollers last year. I just like the idea of being able to do all different fun stuff on bikes, and not just competitive racing.