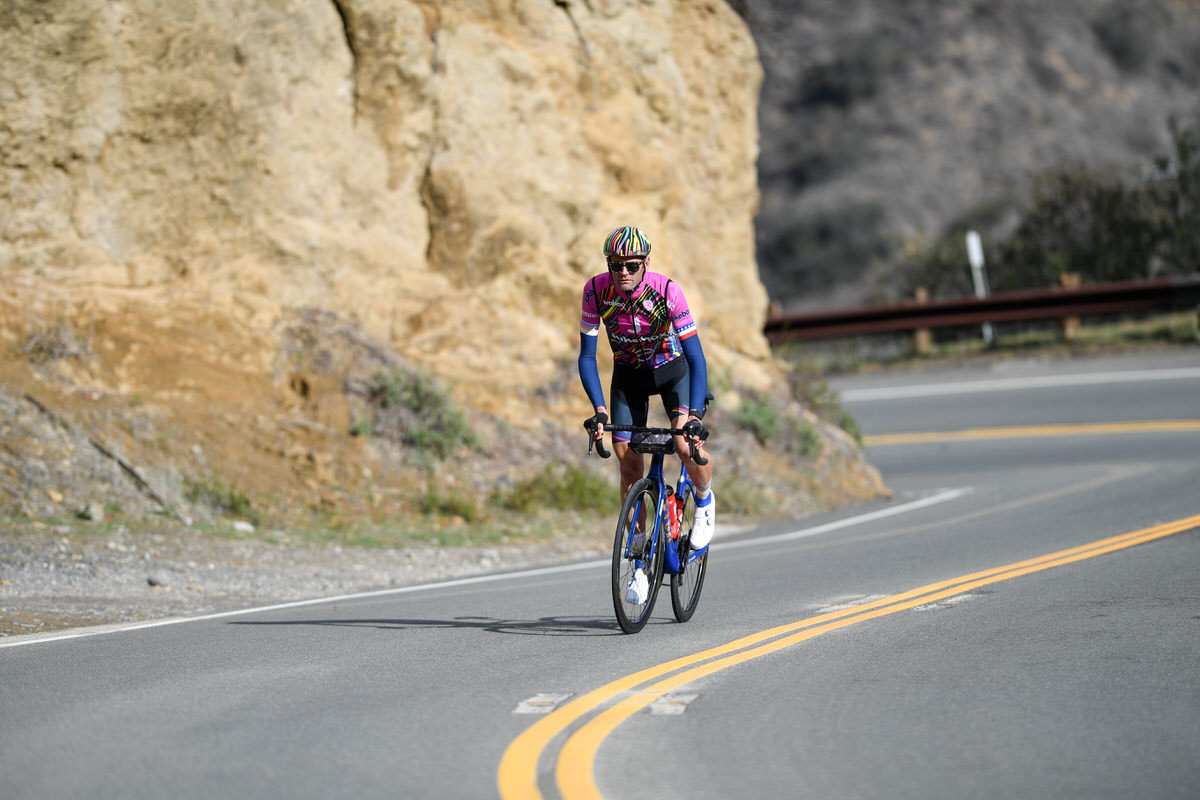 Jukebox Cycling's Phil Gaimon—the king of KOMs—chatted with us about his training, how it's changed since his days in the pro peloton, and how he's protecting his knees from all of that climbing.

How much of your riding is fun versus training?

Here’s the thing: You have to do pretty specific training to get to a certain level, but once you’re there, maintaining fitness is not quite as grueling. So now, instead of five days a week really smashing it, I can get away with three. And then, the other days, I go for nice rides with my friends and the volume from those makes up for having a bit less structure and less rigidity. But I still like having goals. I still like riding hard. I’m still all about smashing the Sunday group ride.

What does your goal setting look like when you're not actually putting race days on the calendar?

It’s definitely more vague. Generally, I just want to have solid fitness. And then I'll look at the next KOM that I want to go after for  a video and I'll plan for that. It's one thing at a time, compared to when I was racing and had to be able to climb and sprint and have every other skill dialed in. So, for instance, next month, I'm going to go to Greenville and Chattanooga. And both climbs I’m doing are about 15 minutes long. So, what I'm training for is to be good for 15 minutes... And to be completely worthless after 17 minutes. It’s a lot easier than trying to be good at a dynamic bike race situation.

What happens after you decide on the climb you’re going to do?

I really just look at the power output that I need to get the KOM on that climb. And then, I look for a climb with a similar gradient in my neighborhood that I can do that work on. And I start going for it. I’m lucky that in my area, I have a ton of hills to choose from within an hour of riding from me. I don’t mind the hills—they’re the voluntary suffering part that I used to love about racing.

Do you always ride a bike that is set up to climb? Or do you have different bike setups?

Pretty much all my bikes are just a little bit more forward and a little bit higher. It wasn't intentional. It just evolved that way. But I don't put out power on the flats like I used to, so it doesn’t bother me. When you're going uphill, you're further forward on the seat, and so I've raised the seat accordingly. And the way I ride has adapted to that position: I go hard on the hills, and I’m not pushing on the flats.

How do you protect your knees with all this climbing?

I don't know. Fingers crossed, but I haven't any trouble. I've never had any weird injuries. I'm careful with my fit and my insoles and stuff like that. And I do yoga.

I don't have the attention for for long yoga classes like I used to but now I do 15 to 20 minutes a couple times each week. Wahoo Systems has like a really cool library of yoga stuff, believe it or not! They even have stuff that’s specifically yoga for knees, and they’re all pretty short sessions. I just like it because I won’t stretch otherwise, but these yoga sessions remind me to make the time.

Everyone thinks that you just climb all day, every day on the bike. But is that really what a week of training generally looks like for you?

I mean, they're not entirely wrong. When I was racing, I averaged around 22 hours a week on the bike… and that’s including a few weeks off. Now, it’s more like 17.5 hours. It’s  a lot, but it's a lot less than WorldTour riders do. Additionally, my job is content now, which means I’m squeezing the big, hard rides in where I can, but the priorities have switched. You can’t get a good workout while also creating content, or at least, you can’t do both well at the same time.