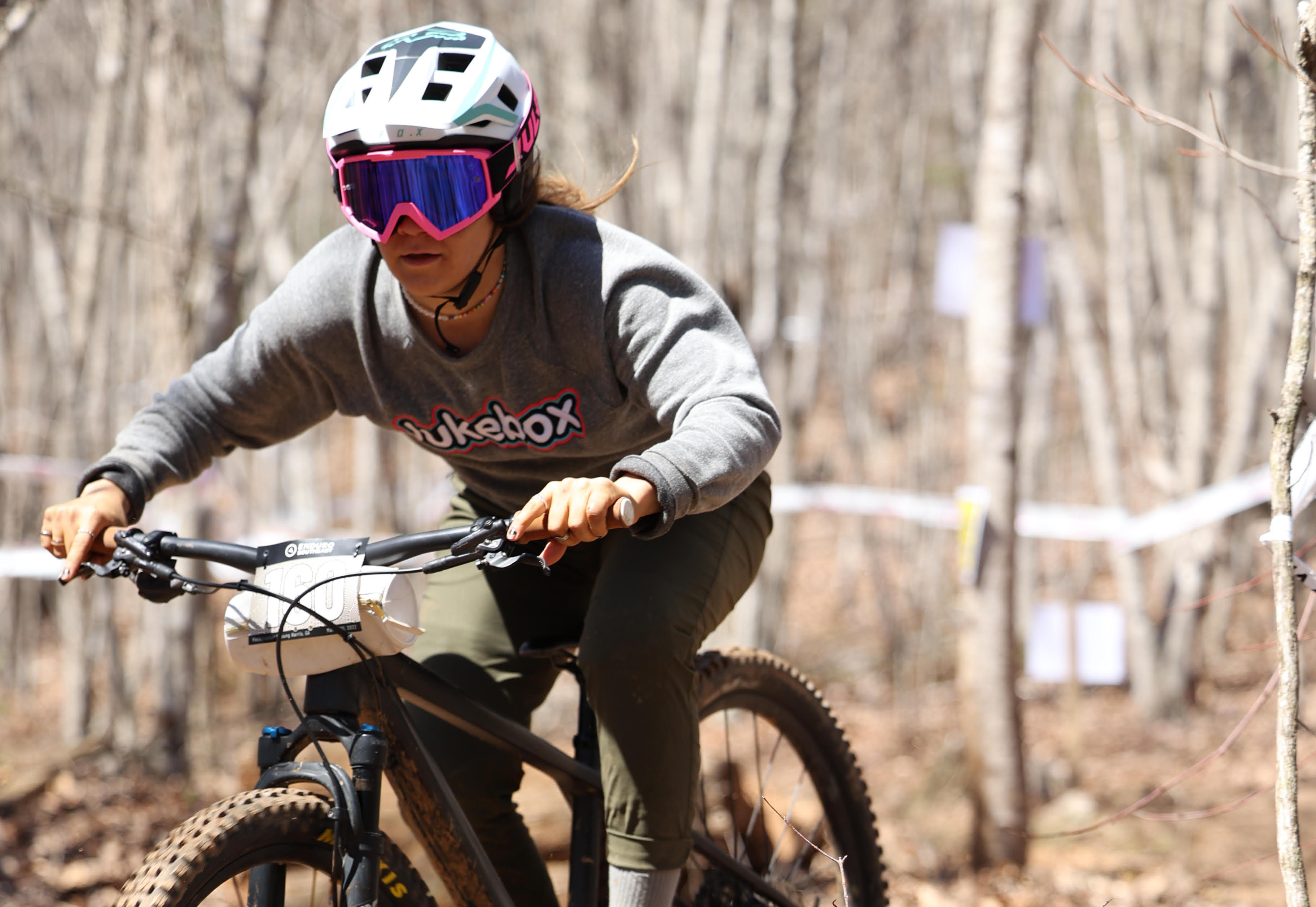 Jukebox’s first gravity athlete, Rachel Pageau, has had a fantastic start to her season. She was second at the COPACI - American Continental DH Champs, then won the first three Downhill Southeast races and won the Windrock Bike Park - Tennessee National Enduro (EWS Qualifier) on her downhill bike. Now, she’s in Europe to contend the first DH World Cup but before she left, we caught up to chat about her season so far.

Congrats on a good season so far, you must be feeling great!

It's been quite good. The races haven’t been huge or anything, but it’s been fun getting the practice, and doing these enduro races with my downhill bike—I even did one that was dry and fast on my XC bike! I’m loving it though, because it’s giving me a lot of confidence. And to do well in the EWS Qualifier was a really big confidence boost.

You did the EWS Qualifier enduro on a downhill bike—what was that like?

I actually wasn't registered for that one because I didn’t have my enduro bike for this year yet. But because of the snow that made the course super technical and muddy as it melted, it got shortened, and the technicality of it made me thing that I had a shot doing it on a downhill bike. I love riding in the mud, so I figured I should just try it!

How was Costa Rica? You finished second in Pan-Ams to start the season.

It was really cool. I was able to ride with the woman who won the race, and she was great to ride with while I was there training between races. I knew the courses there were going to be super dry, super fast tracks that I'm not necessarily used to, and I wanted to practice on that. It was like super good racing to warm up for the big races.

I'm flying to France tomorrow for the first World Cup, but it’s just one race so I’m only there for six days. That gets kind of crazy, but at the same time, it just feels like the pressure is not as intense. It's not like I'm going on there for like a month, which can be really stressful to prepare for. Then I come back here for a month or two before the next big trip, though I’ll keep racing some local stuff. I’ll also get out for Sea Otter, and maybe a couple other West Coast races.

Are you nervous about the first World Cup?

Not yet—but I know once I get there, I'll put pressure myself even though I know I shouldn’t. But because it’s just one race and I’m getting used to the new bike for the season, I don’t have any set expectations, it’s just a great chance to do a big race to start the season, and create a lot of content while I’m there.

On that note, you’ve been doing great Reels on Instagram all season. How do you make that happen while training and racing?

First of all, I try to make all of my content as genuine as possible, especially with the brands I’m working with. I just work with people and brands that I believe in. I also really invest in media, and try to work with photographers and videographers to get content. It can actually be a lot of work! There are some days when I don’t feel like uploading a race recap video, but that’s part of the job. I also enjoy just being positive and hopefully getting more people on bikes. At the same time, if things are not good, I'm not going to act like it's all good because then people don’t get a real idea of who I really am. And things aren’t always perfect!

Which result from the season are you most proud of so far?

I don’t know, actually. I’m definitely hard on myself. If I get second, I’m always trying to figure out what I needed to do to get first. But the enduro I did this weekend, I'm super stoked that I won because I was on the hardtail. It was a smaller race, and adding that really big extra hurdle and still being able to win makes me so much more confident.

And how is van life now that you're a month and a half in?

It is getting warmer, so that makes life a lot easier. I also have more places to stay between the races and my setup is getting better. So my life is getting getting more and more comfortable!

What setup upgrades have you made since we last chatted about your van?

Not very many, honestly. I did get a nicer memory foam mattress, and organized my shelves more with bins. So it looks less cluttered. But the big thing was probably that I got a storage unit to hold stuff that I’m not using at the moment, and that leaves a lot more space for bikes!

And Ranger is still adapting well to van life?

He's getting used to it! I think he knows that it's our home. When we get closer to the van, he just hops up because he knows it’s where we sleep and where we go places.