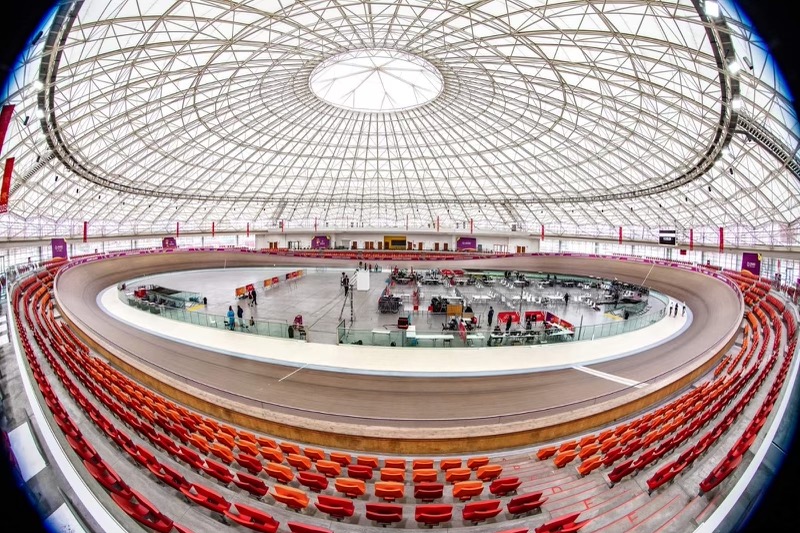 Here, Ruby West is sharing her race report from her third place in the Individual Pursuit and win in the Team Pursuit race with Team Canada at the Pan American Championships in Peru last weekend:

Wow, what a week in Peru! This was my first ever trip to South America, so it was an adjustment for sure. A 27 hour travel day kicked off our trip and that wrecked my body for the first few days, so much so that we weren't sure I'd even take the start line. Thankfully, the day before we started racing, I took a turn for the better and found my race legs, which meant I was good to start with the Team Pursuit on Wednesday.

Our team exceeded all our expectations for the event! On a track that is pretty slow (due to Winter in the southern hemisphere), we set a new competition PB for the team, slotting in 12 seconds ahead of second place in the qualifying round.  We also felt on top of the world because of how we were gelling as a team and how smooth, controlled and precise our ride was. We carried that confidence into racing on Thursday, where in both the first round ride and the finals, we caught the other team on track within 2 kilometers of the 4 kilometer race, sealing the deal and the Pan American Champion title!

On Saturday I was slated to also race the Individual Pursuit, a race I really love and had a rollercoaster of a day with. I started out with qualifying in the morning, which was a bit of a hot mess. Due to my illness earlier in the week, I missed 3 training days on track, meaning I got minimal prep for the IP which is all about proper pacing. With this track being a lot slower than the track we train on in Milton, I went out way too fast, to try to hit the split I'm used to in Milton. This resulted in a blow up of epic proportions. Thankfully, somehow I still made it into the bronze medal final and was able to turn it around for a much better, more consistent ride in the final where I was able to secure the bronze medal and post a relatively fast time.

This event was my first International travel with the track team and it opened my eyes to many of the challenges of track cycling that I wasn't tuned into before: Making sure you get enough carbs from a hotel buffet, navigating a 1 hour open track time with tons of other riders, managing stress and energy while sleeping on a rock hard mattress. All sorts of things that are small hurdles, but add up over time. Now that I'm back home in my own bed eating my own food, I look back at this experience with tons of pride for myself and my team. We walked away with 23 medals from these championships, a huge haul. We learned a lot about rolling with the punches and adapting on the go, which will never not be useful skills. And most importantly we helped each other get through the tough moments with lots of laughs and probably too many jokes while sitting on the floor of airports sleep deprived waiting for missing luggage.

I'm enjoying some sleep in my own bed, but I know I already can't wait for the next one!