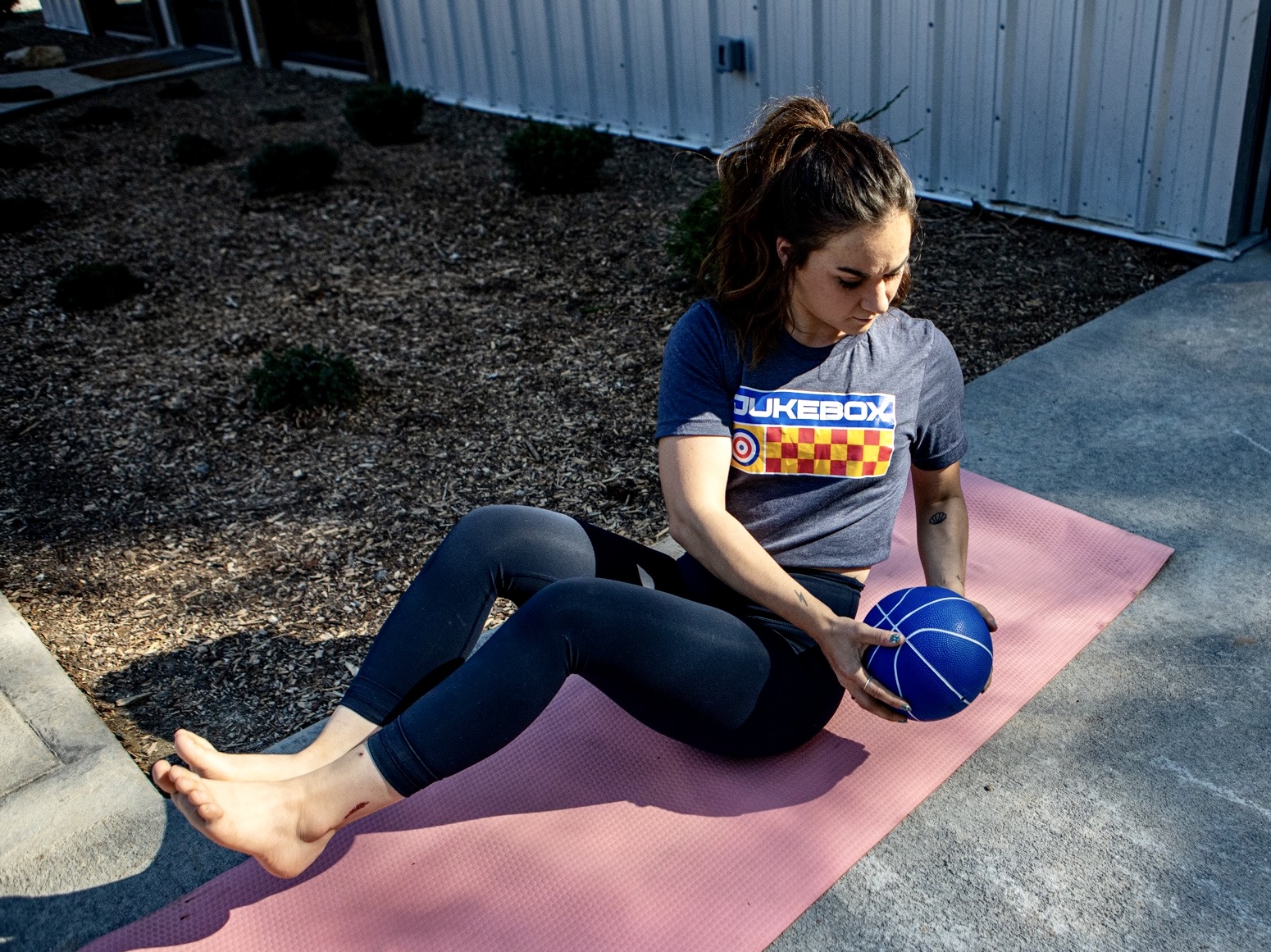 Ever wonder how downhillers who want to compete at the highest level train? It's not all laps of super fun downhill courses. Canadian downhill racer Rachel Pageau just joined Jukebox Cycling as the first MTB-focused athlete on the wide-ranging multi-disciplinary roster. The former XC rider has been racing both enduro and downhill since 2016, and most recently represented Canada at the World Championships in Val de Sole over the summer. Now, she’s chasing North American races around the country in her van, joined by Ranger, her faithful pup before heading over to Europe for the World Cup season of downhill racing. Here, we’re talking all about the 23-year-old's training routine:

What does a training week look like right now?

I work three days in a row. So I wake up, get my work done, stay late at the coffee shop an extra hour to handle my email, and then I go do my workouts and then I eat and then I go to bed. People think downhillers don’t train a lot, and I do realize that a lot of people who are racing downhill don’t really train a lot, but the very top level really commit to doing all of it. You can get by on talent for a while, but that won’t work forever.

Right now, I go to the gym four to five times a week, I do intervals two times a week, I ride road bike or trail two times a week, and then I ride the downhill park two or three times a week. So I train twice probably three to four times a week. And then on two days, I just do one training session. So right now, it's around 12 to 14 hours weekly. So it's not as much as XC racers are doing—they do 18 to 20 hours typically—but my hours are almost all a bit higher in intensity. With XC, most of your hours are lower intensity base miles, but with downhill, you obviously don't need that much base because we're racing for five minutes. You do need base, of course, because every lap you do is very hard on your body. So that's why you need base. But beyond that, I do a lot in the gym and a lot of laps at the park right now.

Downhill and enduro may be gravity events, but they can be extremely tiring!

It's huge. You finish a World Cup and even though if you count the amount of laps you've done over the week you think you shouldn't be that tired, you are drained. Your brain is fried. And also, while enduro and downhill are similar, they're also so different. The way to train for them is different. The way you have to approach features is different. The people there are different. Jumping from one world into the other is really hard.

I have four different gym workouts, one for each time I go to the gym each week, but really, they're all very similar. I always do the same warm up, which is pedaling for between 20 minutes to an hour. If I've done laps in the morning, I'll pedal for just 20 minutes because in that case I'm mostly warmed up. Sometimes, I'll do the hour to make the workout a bit longer to reach to three hours of riding. After the bike, I do a lot of band exercises. Sideways walking, clamshells and inchworms with the band, all these little warmup exercises.

From there, I have circuits of four exercises each that I do. So I’ll do four rounds of 10 reps for all four exercises. It’ll be a combination of squat, bench, deadlift, military press, pull ups, box jumps, pistol squats, leg press. It’s a lot of leg exercises but also a lot of upper body, because in downhill, you have people almost crashing but saving it because of their upper arm strength from push ups. I love going to the gym.

Any tips for someone working on that one-legged pistol squat?

That is something a lot of people ask me because I'm actually really good at them! But I want to say it's at least partially because my legs are really short. I'm already very short in general, but proportionally, my legs are very short for my short body. And genetically, I've got really strong legs. So I can not go to the gym all the offseason, and it only takes me three weeks to get back to what I was doing the season before.

But I did have knee surgery last year, and it took me a while to get back to a full pistol squat, so I did have to relearn it a bit. If you’re flexible enough, holding your foot that’s out in front of you with your hand kind of helps you get lower, it keep your back straight. But I usually just say to do them as low as you can. If you're going halfway, just go halfway. But keep doing them. And then without even noticing, you're going go a tiny bit lower every time. Because when I got surgery, I actually did have trouble getting back to my baseline. At first, I was barely bending at all, but I just kept doing it and gradually going lower and lower every time. So really, it just comes down to consistency and practice.

The one I actually struggle with is pull ups. I have very good muscle memory for lower body, but upper body, not so much. Right now, I cannot do a single pull up. I have been able to before, and I know if I stick with it, I’ll be able to in a few weeks, but right now, I'm doing them with the band that you tie to the bar and put your foot into for a bit of extra help.

I did them my first my first session back in the gym this month, and it was horrible. Even with the bands, it was horrible. And then I actually skipped them at the gym because I was too horrible at them. I had to  have a talk with myself though, and say, “OK,  you're not a baby, do your pull ups. You know how it works. You suck right now, and then you get better.” After that, I stuck with it. And yesterday, I went to the gym, and I used the same band. But instead of doing five, I could do seven and they were mostly easy. I'll just keep building up until I can do 10 with that green band, then I’ll get a thinner band to make it harder, and work on that until I’m up to 10, then I’ll get rid of the band. It's just progression over perfection.

So that is one thing that I'm honestly not proud of. In the last few years of racing, my sleep has always been something I've neglected and it's not great. Really. It’s not great. But at the same time, it makes me hopeful that if one day, I managed to be on a pro team, the amount of things that will be better for me is so cool. I know that there's still so much room for improvement. I'm already doing pretty good. But there's so much room for improvement all the time.

I think sometimes when you're doing everything perfectly and super dialed in, and you're barely seeing progression, it’s frustrating. For me, I have so much room to progress! Like I said before, last season, I was sleeping in a Honda Fit so you can imagine that it was not an ideal race situation. And now I'm sleeping in the van, but it's cold and most nights, I wake up three or four times in the night because it’s cold. So it’s not perfect sleep. And I don't have running water yet, so I'm running on a couple of water bottles which is also not great for hydration, or for cooking meals. My recovery is definitely not great.

But it is an improvement. All of last year, I was going to school full time and I was working 45 hours a week, just so I could get a little bit of money to go to the races. And then I was training 12 hours a week. I was obviously not recovering a whole lot: I was working at opening the coffee shop at 6:30 every morning, and I was working my other job—because I two jobs to make up the 45 hours weekly—from five to nine every night. I was also the RA of my down building, so I would have stuff to do for that, plus my classes. So , I would go to bed at 11 and wake up at 5:30 every day. And at first, it was horrible. And I just got so used to it. I don't think it was very good for recovery. But then, in a way, your body gets used to that.

However, it’s not sustainable. So this year, I’m trying to do better. With sponsors like Jukebox Cycling, I'm trying to invest it in having a more dialed program. I’m investing in myself first. I’m getting heating the van because I can't just get by on poor sleep as I’m going around to do these races.

What keeps you motivated?

I honestly think I should have had more moments where I wanted to give up. It's funny, because so many people tell me that it's not easy for anyone to go to the World Cups. And I was always like, ‘Why are you telling me that? I know!’ It’s never been easy for me. Maybe I make it look so fun that it seems easy. But I worked 45 hour weeks to be there. I slept in my car. It was never easy, but I wanted to do it and so I did. I made it happen.

I guess I just love bike racing more than anything. I love being at the races. I still have so much room to grow, there are still so many things I can achieve. And I'm still achieving things every year. Maybe if I felt like I was plateauing, I might stall in my motivation. But every day, every week, every month, there's still a little bit of improvement that I find. I finally have great partners to work with, and that’s even more motivation to keep going to see where that gets me. As long as there's progression and there's room to grow, I don't see why I would stop.